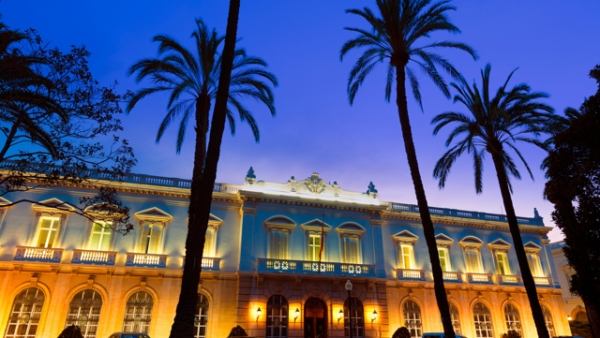 A chain of mountains surrounds the plain which Murcia sits upon, a city of Arab origin whose existence is closely linked to the fertile lands around the river Segura. From among its streets of guilds emerges the tower of the Cathedral, one of the symbols of the city. Although the region of Murcia has been inhabited for more than 2,000 years, the city of Murcia was not founded until 831, when the Emir of Cordoba Abd ar-Rahman II commissioned a walled city on the banks of the river Segura, to be the provincial capital under the Caliphate. It was then that the Moorish region of Mursiya started to gain importance, until it became part of the Kingdom of Castile in the 13th century. Today, many places in the city still evoke its Moorish past. The architectural remains of the Almunia Real, the second residence of the Moorish monarchs, are particularly interesting. The site is about five kilometres north of Murcia, and many items recovered there can be seen at the Santa Clara Museum. Parts of the Moorish city wall can also still be seen in different parts of Murcia’s historic quarter. The old town is situated next to the river Segura, with historical streets which still bear the names of the guilds that used to work there, such as the shopping streets Calle Platería, Calle Trapería, and Calle Vidrieros (silversmiths, cloth merchants and glass workers, respectively). In Plaza Cardenal Belluga there are two architectural gems – the Episcopal Palace (18th century), with a rococo façade and Churrigueresque patio, and the Cathedral, begun in the late 14th century, and notable for its combination of different styles. For example, the lavish sculptures of the Baroque façade are particularly striking, and the impressive tower next to it is 92 metres high. Inside, the Vélez Chapel is a magnificent example of Flamboyant Gothic. Murcian Baroque is widely represented by religious buildings, such as the Church of La Merced, originating from the 16th century and rebuilt in the 18th century, the Convent Church of Santa Ana, and the Churches of Santo Domingo, San Nicolás and San Miguel. Some of the most important 19th-century buildings are also worth visiting: the Town Hall, the Roman Theatre and the Casino, this last with a Neoclassical façade and beautiful interior courtyard with Moorish influence. The neighbourhoods of San Pedro, Santa Catalina and the surrounding area of the Plaza de las Flores offer some of the most picturesque corners of the capital of Murcia. A tour of the city could end in the beautiful Paseo del Malecón, the former embankment which once linked the city to the market gardens around it. Murcia has a broad range of museums and exhibitions. The Cathedral Museum boasts a spectacular processional monstrance from Toledo, while the Salzillo Museum has a beautiful collection of processional sculptures by this artist, one of the most iconic sculptors of 18th-century Spain. The Murcia Archaeological Museum conserves items from the different cultures that have come and gone in the region, including the Tesoro de la Finca Pinta, a hoard of Moorish and Christian coins. The Fine Arts Museum displays works by Giordano and Madrazo, amongst others. Other museums of interest are the Santa Clara Museum, the Museum of the City, the San Juan de Dios Museum, the Science and Water Museum, the Water Mills Museum, the Craft Centre and the Bullfighting Museum.

The city of Murcia has many religious and secular festivals, and its Easter celebrations are particularly notable. The “salzillos” procession, held on Good Friday, is well worth seeing. Also outstanding is the Entierro de la Sardina (burial of the sardine), part of its Spring Festival, which includes a parade. Both events have been declared Festivals of International Tourist Interest. One of the capital’s most deeply-rooted traditions is probably the “Bando de la Huerta”, which is also a Festival of International Tourist Interest and has been celebrated every Holy Tuesday for over a century and a half. This fiesta celebrates the region’s traditional food and folklore, with parades, regional costumes, tastings of local specialities and reading of verses in Panocho, a local dialect. Another popular festivity is the Romería de la Virgen de la Fuensanta, where a procession takes a figure of the Virgin from the cathedral to a shrine five kilometres from Murcia. The local cuisine of Murcia is based on the excellent fruit and vegetables grown in the region. The local specialities made with these raw materials include pisto huertano (similar to ratatouille, with peppers, onion and tomato), chickpeas with Swiss chard, and zarangollo (courgette, egg and onion). And to accompany our meal, we can choose any of the Murcia wines with Designation of Origin: Bullas, Yecla and Jumilla. One of the main tourist attractions in Murcia is the coast, known as the Costa Cálida. Its 250 kilometres of coast, including the Mar Menor lagoon and the Mediterranean, provide a multitude of beaches offering a wide variety of water sports. Inland there are historical towns such as Caravaca de la Cruz and Lorca. Lorca is particularly attractive for its many Baroque buildings – parish churches, convents, mansions and palaces. San Patricio Collegiate Church and Lorca Castle are National Monuments. A few kilometres from this town is the Parador de Puerto Lumbreras, halfway between Levante and Andalusia, an exceptional place to stay if you want to visit these regions. The province of Murcia has a wealth of landscape and environmental heritage, protected by regional parks. Golden sand beaches, with dunes and unspoilt coves can be found in Salinas y Arenales de San Pedro del Pinatar; Calblanque, Monte de las Cenizas y Peña del Águila; and Cabo Cope y Puntas de Calnegre. The mountain ranges and valleys inland are the main features of the regional parks of Sierra de Carche, Sierra de la Pila, Sierra de Espuña, and Carrascoy y El Valle. These places are the perfect setting for sports with a low impact on the environment and for exploring nature in Murcia.