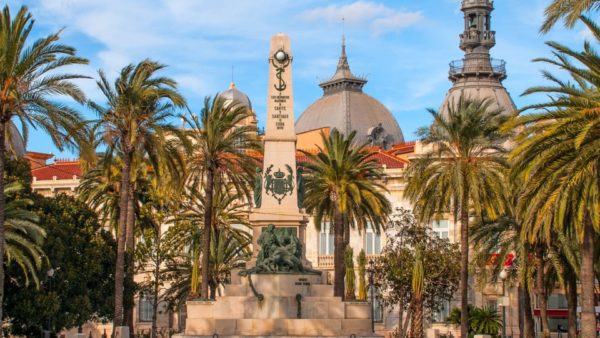 Cartagena is an important port and city located in the province of Murcia on the Mediterranean coastline in Southern Spain. In common with many towns in this area of Spain, Cartagena is split in two – the historic town inland with the sights of Veles Castle, La Purisma convent and San Andres Church (famous for its fine Mudejar ceiling) and Puerta del Cartagena on the coast,artagena dates back to approximately 227BC and was founded by the Phoenicians with the Moors and Romans also having a great influence over the city.

The port was also known as Carthago Nova the new Carthage, such was the importance of the port to the Phoenicians.

Puerta de Cartagena (the port area) has a marina with berths for 200 boats. Tourists will enjoy walking along the promenade which has many fantastic restaurants, bars and cafes. This area is crucial to the economy as it is very much still a working area with the fishing boats bring in their fresh catches daily, unlike many resorts in this area which now no longer fish but rely on tourism instead.

Cartagena is located on the Costa Calida in south-east Spain and is surrounded by the mountain ranges of the Sierra de Almenara and Sierra de Algarrobo.

Cartagena has a long history with the Phoenician, Roman and Moorish civilisations all passing through. Most were attracted here because of the abundance of natural minerals, including lead and iron ore, which can be found in the area.

Cartagena has two airports in its vicinity which are Alicante and Murcia airports of which Murcia Airport is the closest. Residents and tourists are eagerly awaiting the opening of a third airport which is La Covera Airport which will bring even more tourists to the Costa Calida with its golf courses, beaches and theme parks.

Today Cartagena is one of the most important military naval bases in Spain together with Ferrol in the north and has been the capital of the Spanish Maritime Department of the Mediterranean since the Spanish Bourbon dynasty ascended the throne in the 18th century. Cartagena as a naval port has been most important to the country as early as the 16th century.

Because Cartagena was strategically important a number of civilizations have made their presence felt as can be seen from its heritage with landmarks such as the Roman Theatre which is the second largest on the Iberian Peninsula as well as substantial remains dating back to the Phoenicians, Roman, Byzantine and Moorish eras. Cartagena is guarded by two fortresses and one of the must things to do in Cartagena is visit the Castilla de la Concepcion.

A Cartagena nightlife experience can best be enjoyed in the bars and clubs where tourists mingle with locals and dance the night away. Popular Cartagena bars and nightclubs include Stereo, Cayote and Tris Tras. Cartagena also has some fine restaurants which includes Los Churrascos, Mari Zapata, Mare Nostrum, Techosbajos and Tasca del Tio Andres.

Cartagena is less than twenty minutes away by car from the La Manga Strip, Mar Menor with its beaches and the famous La Manga Golf Course. Head for the protected area known as the Sierra Espuna natural park, an area of ouytsanding natural beauty which is a great spot for walking and enjoying the outdoors. If you have visited Cartagena because of its attraction as a city of museums and historic landmarks then you would also enjoy the town of Lorca which is famous for textiles and ceramics.

Cartagena has a some great beaches within easy reach which includes the Cala Cortina, Islas Menores, El Galua Beach and La Gola beach. There are  about 35km of coastline featuring many fantastic sandy beaches and small coves for a spot of privacy. If you are looking for the best beaches for nude sun bathing or naturalists Percheles and Los Lobos.

Some of the best beaches are Playa del Casteller, Playa de Bahia and Playa de Nares. Make sure you head west to the small fishing village of Bolnuevo, famous for the amazing natural rock formations.